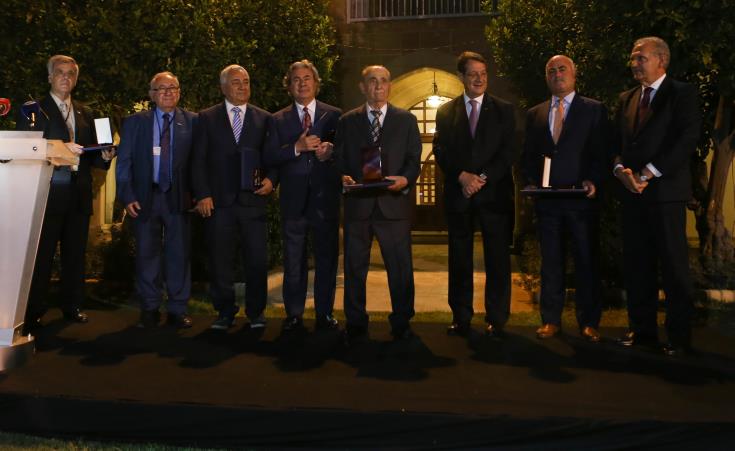 The President of Cyprus Nicos Anastasiades awarded on Tuesday evening the ”Medal for exceptional services” to six Overseas Cypriots for their contribution to promoting justice for the people of Cyprus.

This year the medal was awarded to Nicos Mouyiaris, Antonis Yerolemou (the chairman of Radiomarathon committee which supports young people with a range of learning disabilities in an environment that welcome and respects all cultures. He is also the Chairman of the Greek Cypriot Brotherhood a trustee of the Archdiocese of Thyateira and Great Britain and member of Komi Kebir Association and the Hellenic Centre.) Also Cypriot based in the UK, Andreas Karaolis (Executive Secretary of the National Federation of Cypriots in the UK and Executive General Secretary of the Greek Cypriot Brotherhood), Costas Nicolaou, George Lazari and Tasos Zampas. President Anastasiades said that the award is only a small indication of the debt owed to them by their country.

The President was speaking during a reception, hosted at the gardens of the Presidential Palace, in honour of the members of the World Federation of Overseas Cypriots (POMAK), the International Coordinating Committee ”Justice for Cyprus” (PSEKA) and Young Overseas Cypriots (NEPOMAK), attending the 19th World Conference in Nicosia.

”This evening we honour six of our distinguished compatriots who were and continue to be active in important decision-making centres in the United Kingdom, the United States of America, South Africa and Australia” said President Anastasiades.

Cyprus, he noted, ”has great potential and possesses creative people, who distinguish themselves everywhere, all around the world, as our distinguished compatriots who are being honoured today have proven”.

Overseas Cypriots are ambassadors of Cyprus’ national cause, its language, culture and traditions, the President said, noting that they carry their Cypriot descent with them, as an ”honorary title”.

Photis Photiou, the Presidential Commissioner for Humanitarian Affairs and Overseas Cypriots, said from his part that the people receiving this year’s award have distinguished themselves abroad and are working tirelessly to defend the rights of Greek Cypriots.

Speaking on behalf of all recipients, Mouyiaris thanked for the award, noting that this honour belongs to all Cypriots living overseas and especially to PSEKA President Philip Christopher. ”We will continue to fight for a Cyprus that is free and independent,” Mouyiaris went on and invited those who are well off to support financially the organizations that promote national interests in decision-making centers abroad.

Prior to the reception, members of the Conference Central Council were briefed by President Anastasiades and laid a wreath at the statue of first President of the Republic of Cyprus, Archbishop Makarios III.

Cyprus has been divided since 1974 when Turkey invaded and occupied its northern third. UN-peace talks at the Swiss resort of Crans-Montana commenced on June 28, but in the early hours of July 7, it was announced that the Conference on Cyprus ended without an agreement. Talks held under the auspices of the UN aim at reuniting Cyprus under a federal roof.