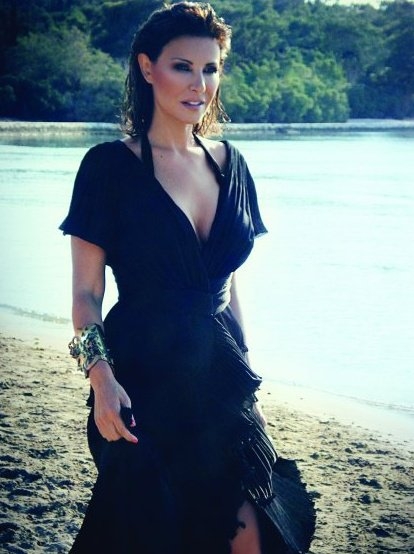 London Greek Radio are excited to announce that Greek singer Konstantina will be performing live at the Penridge Suite on 25th November 2018.
♫♬

Join us for our dinner & dance featuring a live performance by Konstantina & her musicians. Including George Gregoriou on bouzouki, Nikos Savvides on guitar & Giannakis on Keyboard.

We look forward to seeing you all there!

AKIS ERACLEOUS CO-FOUNDER OF LGR SADLY PASSES AWAY AT 66

It is with deep sadness that we announce the passing of London Greek Radio’s co-founder Akis Eracleous on Thursday 18th October 2018, at the age of 66.

Akis Eracleous was from Famagusta, born on the 26th of December 1952 and came to the UK at an early age, where he attended Islington Green School in London.

In 1983, Akis felt there was a need for a Greek radio station to give a voice to our community. No one could have imagined the success of London Greek Radio (LGR) as a pirate/unlicensed station. Thanks to his devotion, determination and continuous battles to keep the station on air, LGR became the WORLD’S first Greek Radio Station to obtain an FM licence in 1989. This was achieved after Akis sold KISS FM, as he believed that providing the community with a platform was integral.

In 2012, whilst leading LGR, Akis re-branded his 1970s ‘Soul Crackers’ and created Crackers Radio, online and on DAB, which he continued to manage until his sudden, unexpected death.

He was the original founder of the famous Kiss FM and presented shows on many radio stations, including Invicta Radio and City Sound Radio. During the occasions when LGR was taken off the air, he launched Sunshine Radio, an English-language service on the Cote D’Azur in the South of France. He was truly a pioneer of British radio. The legacy left by Akis Eracleous will live on.

Akis was a loyal loving family man, lifelong Arsenal fan and passionate season-ticket holder. His unique sense of humour and vibrant laugh will be remembered by us all forever.

The management and staff at London Greek Radio are all deeply saddened and shocked to learn of Akis’ passing and sincerely express their deepest and sincere condolences to his wife Julietta, his sons Emilio and Marko, his daughter Eva, his sister Androulla, his nephews Marios and Venizelos and his family and friends.

Details of the funeral will be announced soon.

May he rest in peace. 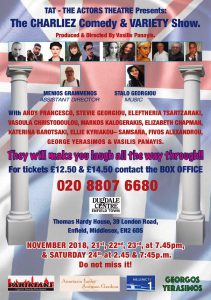 They will make you laugh all the way through.

This event is brought to you by Parikiaki Newspaper, Anastasia Lodge & Autumn Gardens, Hellenic TV, and Georgos Yerasimos 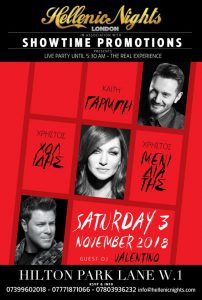 The ballroom of the Hilton Park Lane Hotel, will be transported to the live bouzoukia of Athens; stage, lighting, sound system, table set-ups and many flowers, say the organisers.

A special guest DJ Valentino will be mixing all of the Greek hits on the night itself.

There will be also be additional parking nearby.

Tickets guarantee just the entrance, they do not include any drinks.

All guests will require to pre-buy their tickets prior to the event. There will be no tickets available at the door of the venue on the night.

Minimum Spend on tables – 1 bottle for every 4 people

The Ministry of Transport in Cyprus has issued an announcement giving instructions to passengers affected by the cease of operations of Cobalt air Ltd.

According to the announcement, passengers that were due to fly on the 17th or 18th October 2018 on the cancelled Cobalt air flights, are kindly requested to secure a single one-way Economy Class ticket for their repatriation. Passengers will have to present the evidence of their booking (boarding pass, receipt) to the Accounts Department of the Ministry of Transport, Communications and Works.

For more information in regards to how and when the claim will be made, a subsequent press release will follow.  Alternatively, passengers that were due to fly on the cancelled flights of the 17th and 18th but have not yet issued any tickets may call at any of the telephone numbers below to assist them in issuing a one-way ticket for their repatriation.

All other passengers, Cypriots and non-Cypriots, who were due to travel up to and including 24th October 2018, and wish to return to their place of residence, are kindly requested to call the numbers below to secure a single one-way ticket in economy class for their repatriation.  The cost of their repatriation will be covered by the Republic of Cyprus:

Passengers who purchased tickets by Debit or Credit Cards can contact their Banks for information regarding possible reimbursement.

The Ministry of Transport would like to clarify that the above arrangements do not constitute legal obligations of the Republic of Cyprus, but they are undertaken in an effort to facilitate the stranded passengers.

Additionally, the Ministry would like to stress out the fact that the above arrangements do not exempt Cobalt air Ltd from any liabilities against their customers 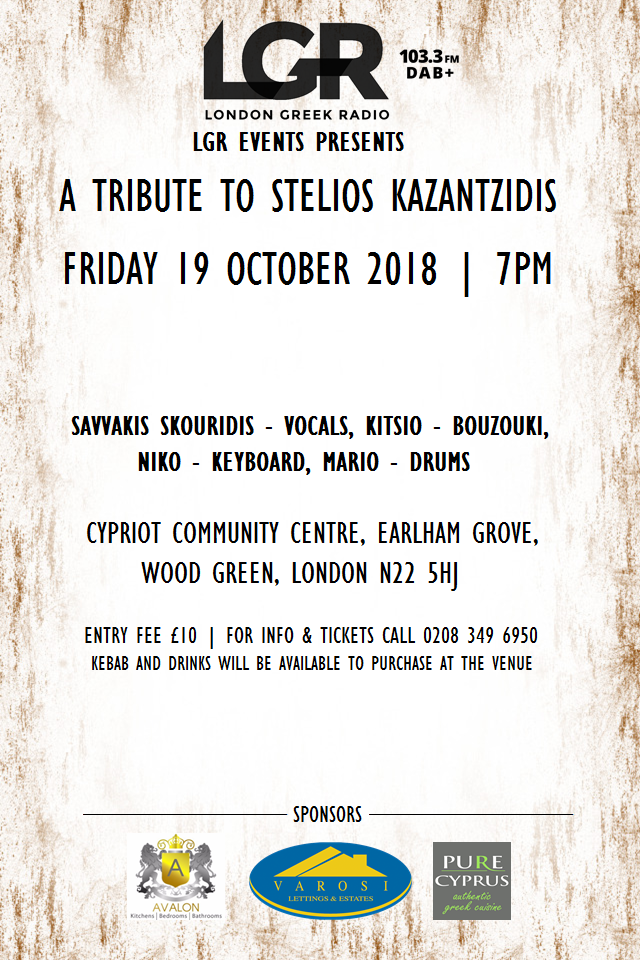 SOLD-OUT. Thank you for your tremendous support.

Kebabs or souvlakia and drinks on sale at low prices.

Music, dancing, in a pleasant and friendly atmosphere!

We look forward to seeing you all there! 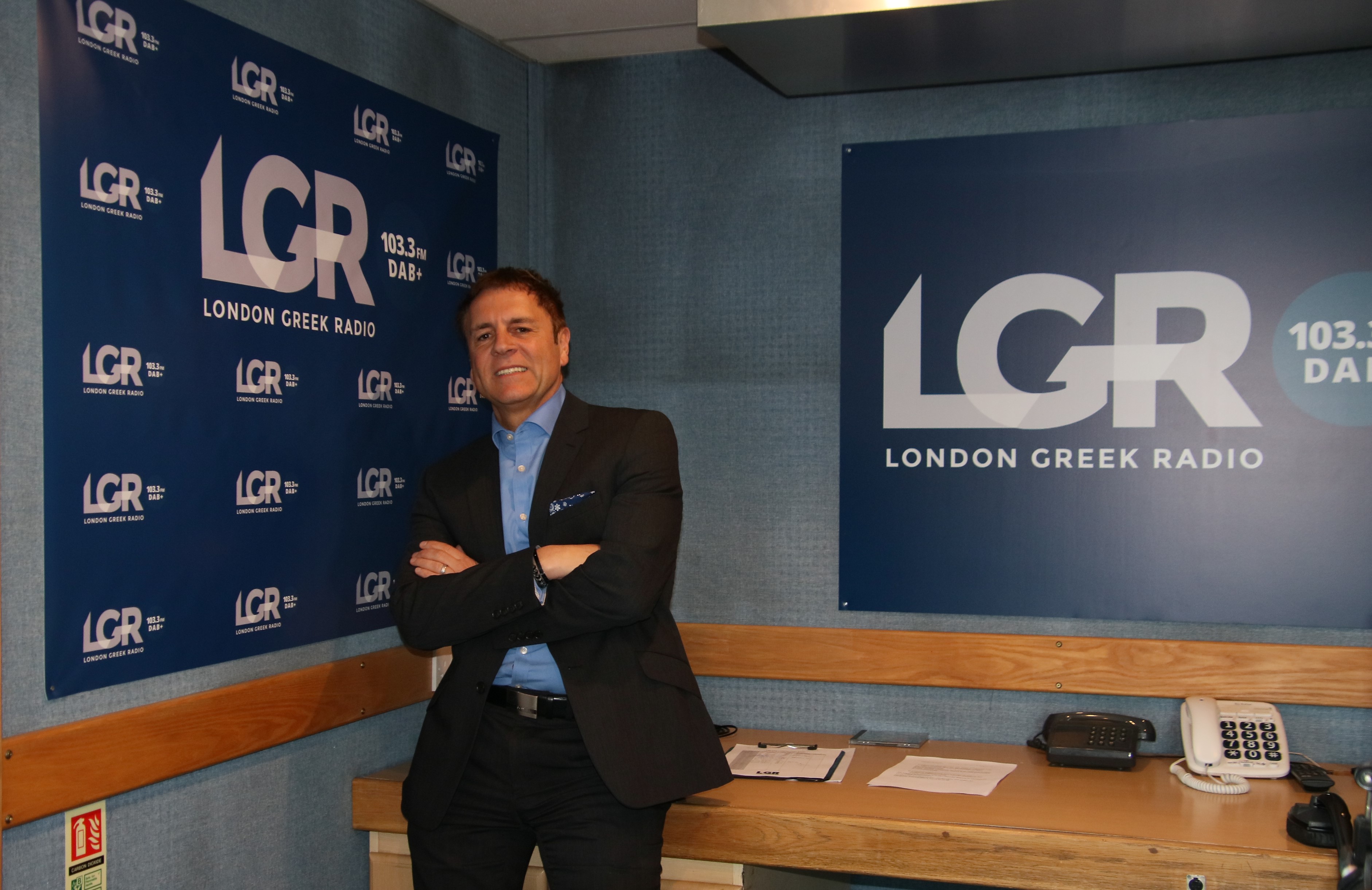 Experienced London estate agent, Karl Knipe, with over 30 years’ experience in the industry, is hosting LGR’s series, “The Property Show”. Karl, partner of Kings Group (15 branches across North London, East London, Hertfordshire and Essex), discuss a variety of issues each month, ranging from house prices and Brexit to stamp duty, and the buy-to-let market, as well as, wealth management. Karl is joined by experts of various sectors in the industry.

Our specialist guests in the sixth one-hour episode;

John Toth; Partner in the Trusts and Estates Team at Ashfords solicitors. John advises on many aspects of private client work such as the creation of Wills, lifetime tax planning for individuals, preparation of Lasting Powers of Attorney, also advises the estates of deceased persons on the best way to realise assets, negotiates with HMRC to ensure that the correct amount of Inheritance Tax is paid, drafts new Trusts and advises Trustees on complications which arise with their trusts and how to remedy them.

Simon Todd; a Chartered Tax Adviser with over 25 years in professional practice. Prior to founding, Engaging Tax, he was Head of Tax with the wealth management arm of a premier global wealth management firm. Simon has a thorough and detailed understanding of Income and Capital Gains Tax Planning and structuring for UK resident individuals, as well as those who are resident but non-domiciled. Simon’s particular expertise is managing the past, present and future tax consequences of esoteric investments such as film finance partnerships and a variety of property based structures.