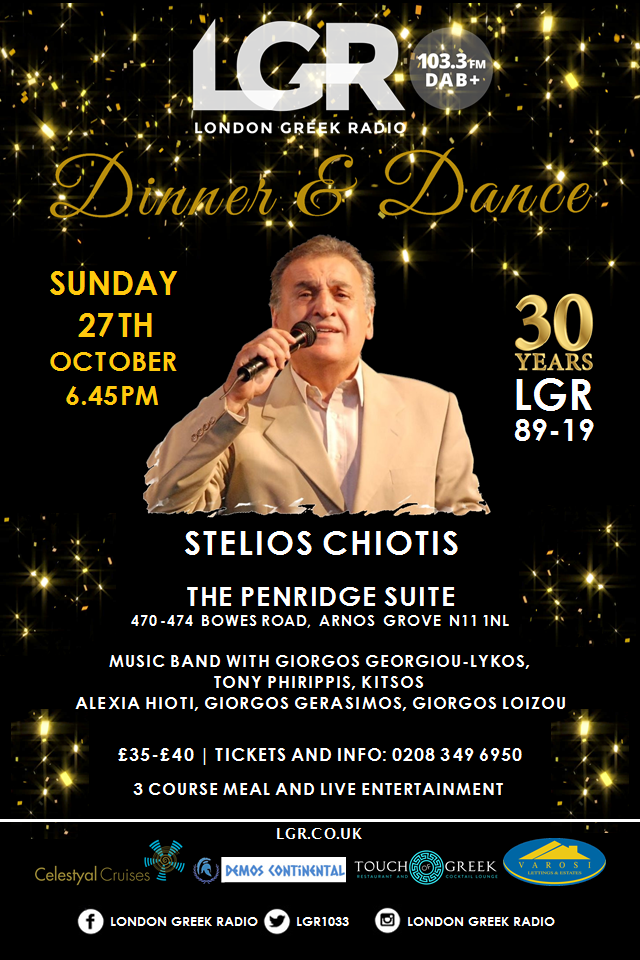 London Greek Radio are excited to announce that legendary Cypriot singer Stelios Chiotis will be performing live at The Penridge Suite on Sunday 27th October 2019.

Join us for our annual dinner & dance featuring a live performance by Stelios Chiotis. Including music band with George Georgiou-Lykos on keyboard, Tony Phirippis on drums, and Kitsos on the bouzouki.

There will also be a live performance by a surprise special guest.

You’re invited to join us to celebrate our 30-year anniversary of broadcasting with good food, good music, fun, and dance!

In 2019, our time has also been spent putting together events, such as this one, where all members of our community could come and celebrate our culture together.

Join us to celebrate our 30th Birthday broadcasting to you since 1989.

Tickets are expected to sell fast, so to avoid disappointment, we advise that you secure your place now.

This event is sponsored by Cyplon Travel in association with Celestyal Cruises, the cruise operator specialised in serving the Greek islands and East Mediterranean; Demos Continental, the 1st authentic Greek and Cypriot grocery store in Palmers Green since 1965; Touch of Greek restaurant, at 170 Station Road, Chingford, which offers stylish food, great cocktails and regular events; & Varosi Lettings and Estates, with guaranteed rental scheme.

Young UK Cypriot Talia Tosun was diagnosed with Acute Lymphoblastic Leukaemia, a type of blood cancer, in May. Unfortunately, after undergoing unsuccessful chemotherapy, she now needs a stem cell transplant.

The best possible match for Talia would be from someone of Cypriot, Turkish, Greek or Middle Eastern descent, but finding a donor has proved difficult since there is currently a huge lack of black, Asian or minority ethnic donors on the Anthony Nolan register.

For someone with blood cancer, a stem cell transplant could be their last chance of survival. Your support could help find their matching stem cell donor and give Talia a second chance of life.

Could you be a match for Talia?

Fit the criteria? What happens next…

Someone out there – maybe you, maybe one of your friends or family members – could be a full match. Please consider registering with Anthony Nolan as a bone marrow donor! You could save a life.

To spread the word and find out more, please visit HERE

Please join us in the Amber Rooms at Regency Banqueting Suite N17 6UR on Monday 14th October between 10am and 5pm. 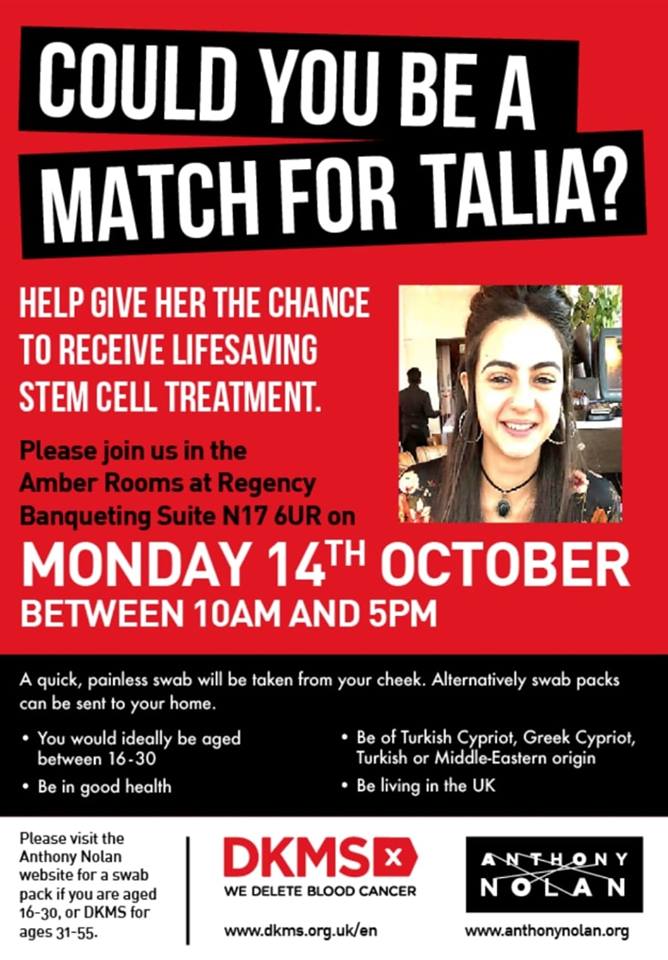 From Home to Home Walk
A walk in aid of Alzheimer’s Society
Saturday 21 September 2019, meet at 2pm at Anastasia Lodge

Please help us reach our fundraising target and, better still, please join us for a 4km stroll between our care homes in aid of the Alzheimer’s Society. Families, small children and pets all welcome! The route is also fully wheelchair accessible.

Globally, dementia is one of the biggest challenges we face, with nearly 50 million people living with dementia worldwide. Alzheimer’s disease is the most common form of dementia. Our private care homes and day care services in Southgate and Winchmore Hill provide our community with residential, nursing and dementia care and support 365 days a year.

It is believed that he died of heart failure whilst on holiday in the area of Ptelos, Magnisia.

He was rushed to Volos Hospital on the morning of Monday 9th September but was pronounced dead at 6.30am.

The singer-songwriter recently performed with Nikos Portokaloglou and the pair had been scheduled to appear together again on Tuesday at the Herod Atticus for a charity concert for children.

Having become involved in music at an early age, Lavrentis formed his first band, “PLJ” at the age of 20, which was re-named to Termites producing rock style songs in Greek.

In 1989, Machairitsas started his solo career as songwriter, composer and singer.

He has since collaborated with most of Greece’s top artists including Maria Farantouri, Giorgos Dalaras, Dionysis Savvopoulos, Dimitra Galani, Dimitris Mitropanis, Vassilis Papakonstantinou and Eleftheria Arvanitaki.

Greek Prime Minister Kyriakos Mitsotakis described Machairitsas as “a great songwriter” and “a wonderful person” on Twitter, stating that “His music will be with us always.” 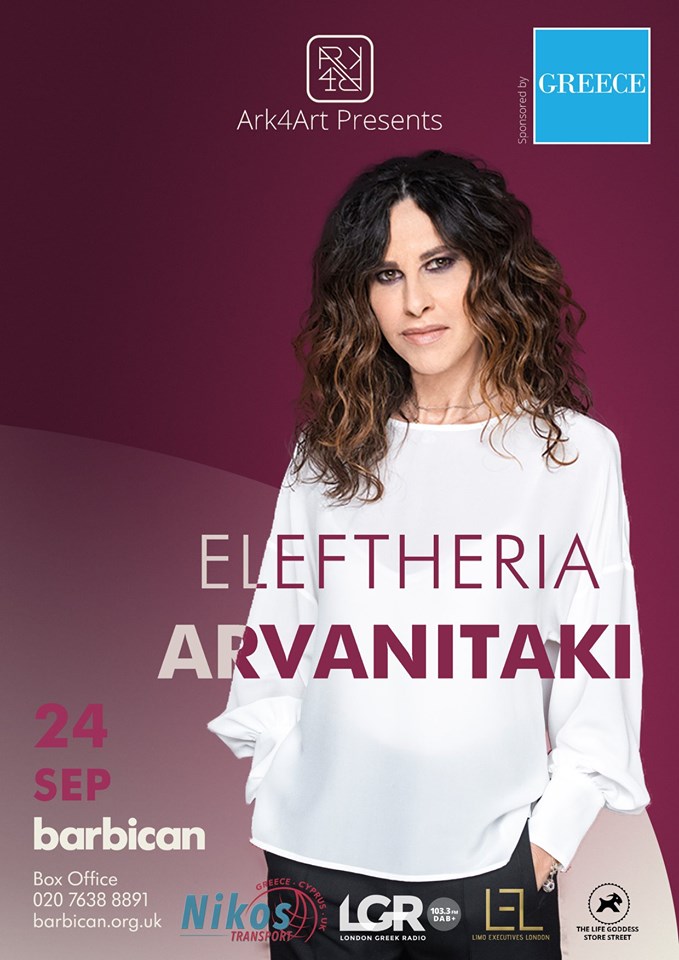 One of the most successful Greek singers, Eleftheria Arvanitaki performs her mix of traditional, rebetiko and Asia Minor influences with contemporary influences from Greece and the Mediterranean. The Ark4Art event is featuring Greek violinist Panagiotis Lampouras.

On Tuesday 24th September at 8pm at the Barbican Centre.

Eleftheria Arvanitaki has been a tireless ambassador for Greek music around the globe, becoming a worldwide sensation across a career spanning more than three decades. With impressive clarity and emotional strength in her voice, her music aims straight at your heart.

She has collaborated with leading Greek musicians as well as international artists and composers, including Philip Glass at the Barbican in 2004. Following her unforgettable performance at the Southbank Centre in 2017, she returns to London as part of her Dynata European Tour.

It is with deep regret that we share the news of the death of a former much-loved LGR presenter.

Chrys Chrysanthou sadly passed away on Tuesday 3rd September 2019 at the age of 68.

As a former radio presenter and producer for London Greek Radio for more than 20 years, he was a much-loved and professional broadcaster.

As a presenter during LGR’s pirate years from 1985, Chrys continued on the airwaves well into LGR’s legitimacy as a station, up until 2006 when he decided to undertake other ventures.

He was renowned for shows which were always well-prepared and researched, valuing the importance of quality Greek music, including Laiko-Entehno and alternative styles particularly being played during his shows.

As a well-known member of the community, Chrys was a respected journalist and photographer for the Vema, Parikiaki and Nea newspapers, as well as being an LGR broadcaster.

He even took photos of members of the Royal family such as the prince Philip, the Duke of Edinburgh and Princess Anne.

Chrys was born in Famagusta and his parents were from the village of Komi Kebir.

After attending Gymnasium Ammochostos, he came to London where he studied at the London School of Journalism and Barnet and Southgate College, where he specialised in Graphic Design.

Thereafter, Chrys moved to Los Angeles, France and Greece before moving to Limassol in Cyprus to set up The Chrys Chrysanthou Photo Studio.

He was devoted to helping his family and friends and was loved by everyone in the community.

John Kyriakides, Chairman of London Greek Radio said, “I share the sorrow we all feel at the news of our dear friend’s passing. Chrys was a true gentleman and maintained the highest of standards at LGR. He will be missed by many and I will always have the fondest memories of him.”

Chrys’ legacy lives on through his two sons, Alex and Philip, and his sister Nitsa.

Everyone at London Greek Radio expresses their deep sorrow at Chrys’ sad passing and express their sincere condolences to family and friends.