On July 20, 1974 at 5:20am, Turkish troops landed on the Republic of Cyprus’ coast five miles off Kyrenia. Since that day, nothing on the island has ever been the same.

The National Federation of Cypriots in the UK on Tuesday rallied Parliament, with the annual All-Party Parliamentary titled ‘Cyprus – Prospects for a Solution’. The Government Spokesperson of the Republic of Cyprus, Mr Prodromos Prodromou, briefed the APPG and members of the UK Cypriot community with the latest developments on the Cyprus issue.

The Federation President, Mr Christos Karaolis, thanked the 19 Parliamentarians, including the Minister and Shadow Minister, who were present and welcomed guests to the event and spoke of the UK Cypriot community’s hope and determination to see a reunited Cyprus free from the outdated system of guarantees and without the presence of foreign troops, as well as the return of refugees to their hometowns and properties. He added, “what we’re asking for is both fair and simple; a fully functioning state that is in line with the rule of law and is free from foreign interference. Put simply a “normal state” as the UN Secretary-General Mr Antonio Gutteres said in 2017.”

Mr Karaolis reassured those present, that despite it being 45 years since the illegal invasion, the Cypriot community is ‘louder than it has ever been before’ with 376 MPs receiving emails ‘calling for Turkey to take it’s #HandsOffCyprus”.

45 years on from the most tragic page in the Republic of Cyprus’ history, at 5:30am the war sirens rang around the island once more.

The UN Secretary-General told the leaders at the end of the Conference on Cyprus in Crans-Montana two years ago that he wanted both of them to get back to him when they were ready with a plan on when, how, and where they want to meet and do a deal, and not before.

Anyone following his career would know that London Cypriot-born singer Kyriacos Georgiou has been enjoying huge success in Greece and a few other countries.

With the release of his new single ‘Pou Na To Fantasto‘, London Greek Radio caught up with Kyriacos exclusively to talk about the song and his summer tour.

The track is “a summer vibe Greek-pop Laika single” according to Kyriacos with an upbeat, and catchy sound, about the blossoming of a summer romance. The opening verses start with the singer’s reflective thoughts about losing their “mojo”, that suddenly changes once he encounters this person, as love sprinkles a little magic.

The song has already gone straight into the London Greek Radio playlists.

Composed by Lefteris Kintatos, a songwriter in Greece at the top of his game; he has several hits under his belt for Konstantinos Argiros, with songs ‘Ti Na To Kano’, ‘Sti Diki Mou Agkalia’ and ‘Oso Niotho’.

Kyriacos said, “He is one of the biggest Greek hitmakers right now. I am absolutely thrilled that he composed a song for me.”

Last winter, Kyriacos supported and performed alongside Natasa Theodoridou, Petros Iakovides and Stan in Thessaloniki and in Athens.

He visits Limassol, Agia Napa, and the Cypriot capital Nicosia for the Beer Festival in September, in the Cyprus leg of his tour.

Kyriacos is currently engaged in career-boosting talks with bouzoukia bosses, to confirm exactly where his performances will be for Athens and Thessaloniki this winter.

Tune in to LGR for all of the latest, and greatest summer sizzlers on 103.3 FM, DAB+ & via lgr.co.uk

For Parpa, this was his first attempt at a title. He boasted a record of 8-1 with his only loss being against Czech Republic’s Vasili Ducar in his fifth fight, Parpa’s victory bolsters the young Cypriot’s career going on to fight at even higher level for more illustrious honours.

It was a tough fight for Nick and he went the distance in a 10 round fight versus the defending champion Daniel Mendes from Birmingham but came out with a comfortable and a comprehensive 99-91 points victory.

In a statement from the Goodwin Boxing Facebook page, it said, “It’s Parpa who takes it! Winning 99-91 on the scorecard. More aggressive and pressed the fight from start to finish. Really great fight, Mendes was a worthy Champion but it was Parpa’s night tonight!!” 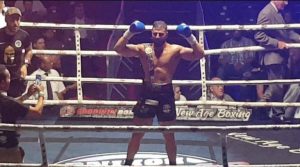 The Palmers Green boxer on his Facebook Page said he was absolutely thrilled at winning. “WE DID IT!!!! #AND THE NEW SOUTHERN AREA CRUISERWEIGHT CHAMPION Nick The Nightmareeeeeee PARPAAAAA. I just want to say a MASSIVE thank you to my team, my loyal supporters, family and friends for believing in me and helping me fulfil my dreams, I could not have done it without you all.”

Parpa had thanked his opponent for a formidable game and the work that went behind it, with his coaching network.

“Thank you Daniel Servant Mendes for the opportunity, he put up a great fight and was a worthy champion. We gave the crowd one hell of a fight. Thank you to my manager Steve Goodwin for giving me this opportunity and guiding my career in the right direction, he truly is a great manager and a friend. Thank you to my coach Joshua Burnham for everything and for pushing me every day in the gym helping me maximise my potential. We did it!!! Thank you to Dave Tausz for pushing me every-day also in the gym. He’s a top strength and conditioning coach.”

His Greek-Cypriot dad was proud of his son’s achievement, Sav Parpa said, “I am a proud father my sons the Southern Area Cruiserweight champion!!! Yo Parpa we did it.”

Nick Parpa is expected to find out his next opponent when the summer finishes.

THE GRENGLISH PROJECT LAUNCHES IN UK

Middlesex University and the University of Westminster are delighted to announce the launch of the GRƐNGLISH PROJECT.

Led by Dr Anna Charalambidou and Dr Petros Karatsareas, the project seeks to crowd source Grenglish words – English words that the UK’s Greek Cypriots borrowed from English and turned into Cypriot Greek. For example, pason for ‘bus’, ketlon for ‘kettle’ or experiotita for ‘experience’.

Anna and Petros believe that Grenglish words are unique linguistic creations that are emblematic of the Greek Cypriot community’s history, resourcefulness and creativity. However, they are facing the threat of disappearance as younger generations of British-born Greek Cypriots tend to avoid them.

The GRƐNGLISH PROJECT brings together older and younger generations within the UK’s Greek Cypriot diaspora in a community campaign of language documentation. We invite everyone to visit our website www.grenglish.org and submit any type of linguistic material relating to Grenglish: words and their meaning, thoughts about their origin, visual material such as photographs, stories that involve the use of English.

Anna and Petros will curate all entries and produce an online Grenglish dictionary as well as a print dictionary, a permanent record for generations to come.

The 16-year-old attends St Andrews the Apostle School in Barnet.

“A big well done and congratulations to one of our own, Year 11 student Alex Solomon who has signed a 2 year scholarship with Leyton Orient! Well done Alex!”, a spokesperson for St Andrews the Apostle School said.