The LGR Airplay Chart this month.

The biggest, most in demand hit songs in the Chart.

The rankings are based on radio airplay detection as measured by the official ‘UK Airplay Chart’.

Celebrating Greek music and creativity on the air-waves

Greece has confirmed that Stefania will be the nation’s representative at the upcoming Eurovision Song Contest in Rotterdam taking place later this year.

The 17-year-old Greek-Dutch singer Stefania Liberakakis will perform in the Eurovision Second Semi-Final at Rotterdam’s Ahoy Arena, this May. She was born in Utrecht in the Netherlands to Greek parents from Sofiko Evrou in Greece.

The Greek broadcaster ERT announced the artist and song-title ‘Superg!rl’ in an official statement this month. The ethnic up-tempo song, where Stefania sings about the adolescent youth, a self-empowerment song which draws on the innate strength each person possesses against which battling challenging situations, or issues.

Stefania had taken to Instagram thanked the Greek delegation and responded she was “proud” to be flying the Greek colours at the Eurovision, told music fans.

The Eurovision veteran Dimitris Kontopoulos and music production ARCADE, composed and produced the tune, co-written the lyrics with Sharon Vaughn. The Creative Director Fokas Evangelinos will be responsible for the stage show, well-known in Eurovision circles, for numerous impressive stage acts in the contest.

The songwriters confirmed a modern ethnic up-tempo dance-pop track for Greece, with Greek instruments. The producers describe a “radio-friendly current hit song” with immense potential, standing out amongst the competitors in the Eurovision’s line-up.

The Eurovision tune and the official video-clip whose filming was shot in Athens, will be released in March. We at London Greek Radio are super-excited to be premiering our Greek entry very soon…

Stefania came to fame in 2014, when she participated on The Voice Kids. After wowing judges with her audition performance of Alicia Keys’ ‘No One’, Stefania made it as far as the Battle round before being eliminated. She also sang as part of the Dutch children’s choir Kinderen voor Kinderen.

More recently, Stefania has worked on her solo pop career. Late last year, Stefania released ‘Turn Around’, a sophisticated contemporary pop track. Her debut single in 2018, ‘Stupid Reasons’ reached No1 in the Kids Top 20, a hit single, composed and written by J Joachim Vermeulen Windsant and Maarten ten Hove. In March last year she released the single ‘Wonder’ which was the soundtrack to the animation film ‘Wonder Park’.

Stefania has also been working on her pop career in Greece. Last summer, she performed at the Mad VMA music awards, as part of an all-girl cover of Daddy Yankee’s ‘Con calma’ along with Ilenia Williams and Konnie Metaxa.

As well as singing, Stefania also has an acting career. She has starred in the Dutch high school mockumentary Brugklas, the recent dystopian action film De club van lelijke kinderen (The club of ugly children) and made an appearance in the teen comedy 100% Coco New York.

The Eurovision Song Contest Semi-Finals are on 12th and 14th May, with the Grand Final on Saturday 16th May 2020.

Stefania will perform ‘Superg!rl’ in the Second Semi-Final on Thursday 14th May.

London Greek Radio wishes Stefania and Greece the best of luck in the Eurovision. 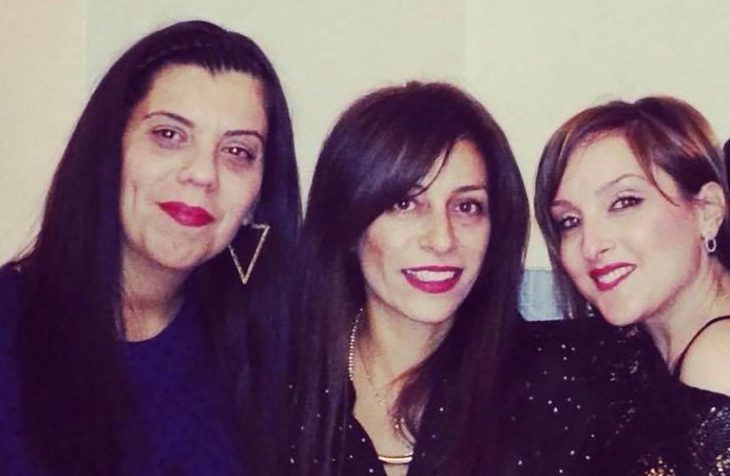 Cypriot leukaemia sufferers have 20% chance of a donor match help improve the odds for Stella.

Before Christmas, an urgent bone marrow appeal was launched for Stella Charalambous, a 45-year-old mother of one who has leukaemia. Among those spearheading the campaign to find her a blood donor match is her friend of 34 years, Naz Hassan.

The two, pictured above with another close friend Tina Agsti, are originally from North London, and while Stella and her family now live in Cyprus, the ladies have remained in close contact.

Stella’s appeal for a donor was initiated by Tina, who teamed up with Androulla Stylianou, head of the UK-based Leukaemia Cancer Society (020 8374 4821), a vital support organisation for numerous Greek and Turkish Cypriots seeking blood donors.

Stella’s friends quickly rallied round, sharing details of the appeal online and with ethnic community media. They have also distributed flyers and posters in North London, where there is a large Cypriot community, in a bid to drive up registration numbers and help find a donor for their seriously ill friend.

Their appeal is supported by British blood charity DKMS, which can arrange a mass swab testing session for groups, or they can send a special kit home for people to do their own swab test.

Currently, the odds of finding a match for Cypriots, whether Greek or Turkish, is very low due to the small number of people from both communities being registered on the global blood register. The two communities share similar genetic codes, making them highly suitable for blood donor matches.

“As a community, we need to pull together. People shouldn’t just read and ignore this appeal. We really have to help each other, as this illness can strike any of us at any age. So please take the (swab) test – your blood could potentially save a life,” urged Ms Hassan.

To help improve the odds of survival for blood cancer patients of Cypriot, Turkish, and Middle Eastern heritage, simply register online at dkms.org.uk for a cheek swab kit. It’s open to all UK residents who are healthy and aged between 17- 55 years of age.

The swab test itself is a painless, 30-second procedure. You use a cotton bud to rub on the inside of your cheek, which is returned to DKMS in a sealed bag. Its labs will do the necessary tests and add your details to the UK blood register, which is accessible to other blood charities worldwide. You only need to do the test once and it will cover you until you reach 55.

Where a match is generated, the process for donating stem cells is far easier and less invasive than previously, and there are no known health risks. You simply give blood, which is used for stem cell treatment of the patient with blood cancer.

The LGR Airplay Chart this month.

The biggest, most in demand hit songs in the Chart.

The rankings are based on radio airplay detection as measured by the official ‘UK Airplay Chart’.

Listen to your favourite music choices tune in to LGR!

Celebrating Greek music and creativity on the air-waves