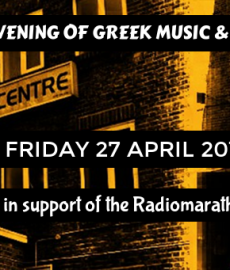 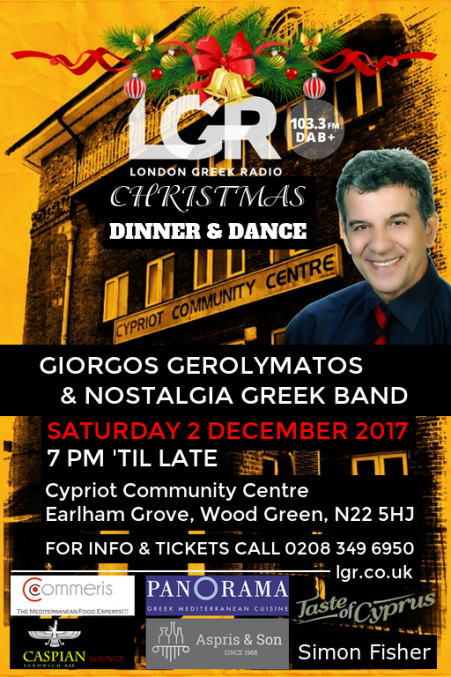 The Management and Staff of London Greek Radio would like to invite you to their Christmas Dinner & Dance, 2017. The start to the festive season we have live music and food on Saturday 2 December at 7 pm.

We are also excited to announce entertainment for this evening includes Giorgos Gerolymatos, all the way from Greece, for a 1 night exclusive performance. Not to mention live music by Nostalgia Greek Band!

Events like this offer the chance for our station to come together with the community and enjoy a fabulous evening. Moreover, through these events we are able to renew and build a good relationship with both our listeners and the companies which work alongside us.

In 2017, our time has also been spent putting together events, such as this one, where all members of our community could come and celebrate our culture together.

Wishing you, a happy start to the holiday season.

The event is sponsored by Caspian Lounge Sandwich Bar in North Finchley, Commeris UK Ltd the Mediterranean food experts, Panorama Greek Restaurant in Whetstone with Mediterranean cuisine at its best. Aspris & Son, the wine, beer & spirits merchants, Simon Fisher with a 50 year experience as a loss assessor, Taste of Cyprus in Palmers Green for a wide range of breads, sweets & pastries.

EUROVISION QUEEN Eleni Foureira is coming to LONDON for a one night only, exclusive performance. 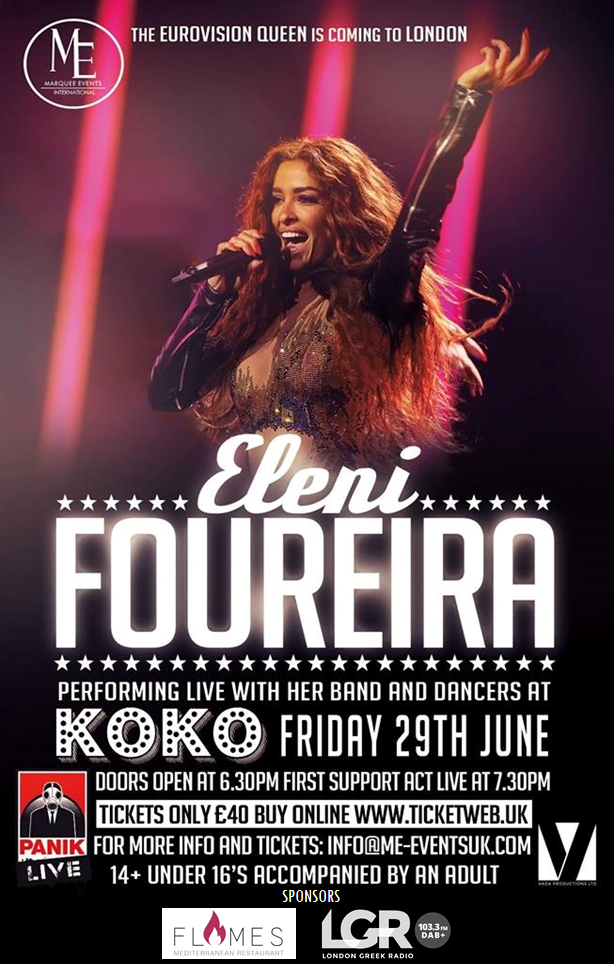 On the night there will be various supporting acts including special guest Mixalis Theodosiou with his brand new single.

Standard tickets are just £40 per person. Book yours now via ticketweb.uk. Standard and VIP tickets are also available via Flames restaurant in North Finchley.

Everyone under the age of 16 must be accompanied by an adult.

This event is sponsored by London Greek Radio and Flames Restaurant.

Reports of a minor explosion and “people running” at Southgate station – an incident not believed to be terror-related.

British Transport Police said there were no reports of serious injuries and their enquiries continue at Southgate station which has been closed.

The incident comes as officers investigated a suspicious package.

Police believe the explosion was caused by a faulty drill battery.

London Ambulance Service said they treated three people at the scene for minor injuries while two others were taken to hospital.

A 23 year-old man has been arrested held on suspicion of an act likely to cause an explosion to injure or damage property, and endangering safety on the railway.

The local Cypriot MP Bambos Charalambous for Enfield Southgate had visited Southgate station on the Tuesday night; he issued a statement which confirmed that the “minor explosion” was non-terror related.

“Southgate is still cordoned off after the explosion shortly after 7 pm. @metpoliceuk have confirmed that explosion was non terror related. Sadly there have been some injuries, it seems from the panic. My thoughts are with everyone who has been hurt and a huge thanks to our emergency services.”

“Officers are on scene alongside @metpoliceuk. Please avoid the area – we’ll provide updates as soon as we can.”

The Metropolitan Police said in a statement: “Police were called at 7.03pm on 19 June to reports of an explosion and people running at Southgate underground station.

“Met officers remain at the scene along with colleagues from British Transport Police, London Fire Brigade and London Ambulance Service.

“Cordons are in place and the station is closed.

“Enquiries are ongoing to establish the cause of the reported explosion, which appears to have been minor.

“We are not aware of any serious injury.”

The arrested man, who is from Enfield, has been released under investigation pending further enquiries.

Second-place for Cyprus in this year’s Eurovision Song Contest was a fantastic achievement for our tiny nation and the best ever result since 1981, which was Cyprus’ debut in the contest.

The world’s longest-running TV music competition saw Netta from Israel win with the song ‘Toy’, written and composed by Doron Medalie and Stav Beger. Israel’s entry received 529 points, followed by runner-up Cyprus with 436 points. The Cypriot tune was the bookies’ favourites in Eurovision week when Eleni’s rehearsals impressed on-lookers at the Altice Arena. All of a sudden, Cyprus was dominating the global networks with the spotlight on the island immensely helping it in all sorts of ways.

Eleni Foureira set the Eurovision scoreboard ablaze with the up-tempo song ‘Fuego’ managing Top 5 position with the jurors. It was a catchy track with an ethnic edge that swirled with clarinet riffs.

She received the full 12-points by jurors in Spain, Greece, Ireland, Belarus, Malta, and Sweden, with televoting 12-points from Armenia, Bulgaria and… Greece. The UK’s phone-vote gave the Cypriot tune 8 points. With such a robust British Cypriot community it was little wonder that Cyprus received strong televoting support in both the semi-final and final.

The voting had us at the edge of our seats and was very intense. It “went to the wire” with jurors ranking Israel third overall in the public’s opinion, and Cyprus fifth; the Top two favourites.

Eleni was very gracious, humbled and upbeat about the result, who said, “I am so happy, thank you so much.  Being second in Eurovision is like you win… This is the best position Cyprus ever had in the history of Eurovision. I feel like a winner.”

On the night, Eleni was awarded ‘Best Artistic Performance‘ in the Marcel Bezençon Awards. The award winners are announced only hours before the Eurovision live grand final.

The track, “Fuego”, released in March, stormed into the LGR playlist going straight to number one on the London Greek Radio Chart. Eleni’s back-catalogue of infectious hits has definitely made her one of the most prominent artists on the station’s track-listings.

The CyBC had announced Eleni as the Cypriot representative in February this year internally selecting the Greek pop singer. The tune was composed for the competition by Alex Papaconstantinou or Alex P, a Greek-Swedish producer. He collaborates on the tune with Geraldo Sandell, Viktor Svensson, Anderz Wrethov and Didrick.

The CyBC chiefs can feel justified in their selection of Eleni; it was a winning-package, a credible artist, with a current, effective pop song and one that showed off her incredible stage skills.

LGR acknowledge the work of the Cypriot delegation’s Evi Papamichael and all of their team; Alex Papaconstantinou, Panik Records, Jean Sacha-Baptiste and everyone else associated with this amazing result.

LGR Club Nights are back with another massive party at the Country Club Trent Park!! Join us on Saturday 14th July for another unforgettable party.

Our DJs Makis & Avgoustinos will be on the decks, kicking off summer 2018 the Greek way. Doors open at 9pm and the party will continue through till 2.30am.
♫ ♪
They will be mixing Greek & English hits, all night long. Fusing all the best Modern Laika, Greek Club, Greek Classics and Zeimbekika with all the biggest English hits of the decade.
♫ ♪
Please note our online tickets shop is now closed. Limited tickets will be available on the door, please arrive early if you have not pre-purchased your tickets.

To buy tickets for this event please visit our events page: Greek Summer tickets from Skiddle.


Article written by Miranda Athanasiou
We use cookies to ensure that we give you the best experience on our website. If you continue to use this site we will assume that you are happy with it.OkPrivacy policy