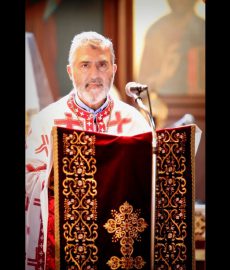 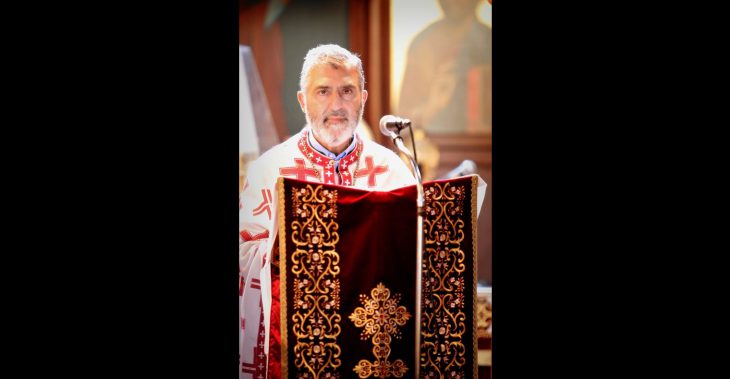 It is with deep regret and great sadness that LGR has learnt of the death of Father Andreas Hadjisavvis on Friday 15th October 2021. He was 69 years old.

For forty years, Father Andreas self-sacrificially served his congregations, being incessantly on the side of all those who needed the help and support of a priest in every circumstance of their lives.

Thousands of Orthodox faithful in North London were baptised, married, buried and received Holy Communion from his hands.

Father Andreas was born in 1952 in Nicosia. His parents were from Akanthou and moved to London in 1960, living in Chalk Farm.

He subsequently attended Hull University where he studied Economics.

Whilst at University, he was invited to meet the Queen – Elizabeth II, and on another occasion, Father Andreas was one of ten students from the UK to have dinner with the Queen Mother at Clarence House.

Eventually, he moved to what became known as “his second home” – the Greek Orthodox Church of St John the Baptist in Wightman Road, Haringey where he served for over 30 years.

At that time, Father Andreas was also involved in the Anglo Akanthou Association and one of his proudest moments is when he helped organise one of their dinner and dances at the Piccadilly Hotel, where Tottenham Hotspur players attended with the FA Cup immediately after their FA Cup Final win over Manchester City in 1981.

He was also involved in raising money for North Middlesex Hospital, which helped pay for heart monitors.

Father Andreas was also one of the first to help raise money for Children in Need.

He is survived by his wife Maria, four children – two sons and two daughters and five Grandchildren, along with lots of friends and relatives.

LGR understands that Father Andreas Hadjisavvis will lie in state at St John the Baptist Church, Wightman Road, on Friday, 22nd October from 10.00am to 9.00pm.

At 6.00pm, His Grace, Bishop Iakovos of Claudiopolis will officiate the Trisagion Service for the repose of the soul of Father Andreas.

The funeral will take place on Saturday, 23rd October at St. John the Baptist Church in Wightman Road.

His Grace, Bishop Iakovos of Claudiopolis will officiate the Orthros and the Divine Liturgy from 7.30-9.30am.

At 10.00am, His Eminence Archbishop Nikitas of Thyateira and Great Britain will preside over the funeral service.

The burial will take place at New Southgate Cemetery at 2.00pm.

In place of wreaths, the family kindly asks for donations to be given to Moorfields Eye Hospital, the North London Hospice and the Parish-Community of St John the Baptist.

A Book of Condolence has been placed at the entrance of St John the Baptist Church.

Everyone at LGR is deeply saddened to learn of Father Andreas’ passing – may his memory be eternal.


Article written by Viron Karidis
We use cookies to ensure that we give you the best experience on our website. If you continue to use this site we will assume that you are happy with it.OkPrivacy policy