GREECE ARE AMONG THE FAVOURITES AFTER QUALIFYING FOR EUROVISION FINAL 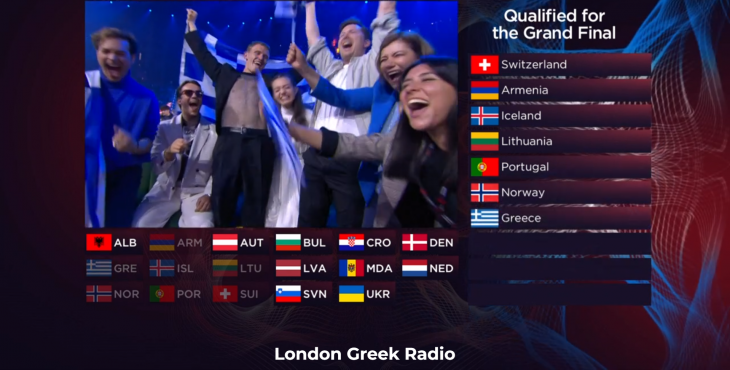 Singer-Songwriter Amanda Georgiadi Tenfjord on Tuesday night qualified for the Eurovision Grand Final with her song “Die Together”.

This year, the Eurovision Song Contest takes place in Turin, at PalaOlimpico and the 25-year-old, who is studying to be a doctor, is a half Greek and half Norwegian singer-songwriter, born in Ioannina, Greece and raised in Norway.

Of the 17 competing countries, Greece was one of the 10 that gained enough votes from professional juries and the public to advance to Saturday night’s sing-off.

This is the twelfth time that Greece has qualified for a Eurovision since 2008.

“Die Together” was a “grower” on the London Greek Radio play-lists peaking at #5 in recent weeks.

The introspective song, has the sounds of a strong, melodic electro-pop ballad with emotional overtones which seem to cut deep. It’s a break-up song about a genuine relationship that’s expected to tear at the heart-strings.

“The camera zooms into a close-up in the acapella section as it gradually builds up with wider stage shots of blue melting chairs. The visually-arresting act is well-crafted and thought out”. Amanda said the imagery of melting chairs is “symbolising break-ups or things coming to an end…”

“Her soaring melodies combined with vocal hooks gives the tune that feel of a competitive package as Greece embarks on a Top 10 placement.” LGR’s reviewer furthermore noted.

“The Greek staging was immaculate and well-executed. It was sufficiently subdued and effective, and every single frame and shot was thought-out, presenting a slick, professional routine.”

The singer’s creative staging director is Fokas Evangelinos, a well-known figure in Eurovision circles, tasked with the elevation of her song.

In Mr Neophytou’s view, “Amanda in a white frock is emoting throughout, the song’s three minutes. A stage bathed in whites and blues, not only are these Greek flag colours which is a nice aesthetic. These colours suit it’s sad and melancholic undertones. The blinking lighting effects were in sync with its electro-pop beats, and the crescendo or climatic ‘die together‘ choruses.”

Amanda gave a strong, stoic and dramatic performance. Her frantic, hand gestures to her “Take my heart and rip it out and bring it to the other side” line, in the bridge, intensified the emotion that is felt, on the stage.”

The Eurovision Song Contest Final is broadcast on Saturday 14th May on BBC1.

London Greek Radio wishes Greece the very best of luck in the competition.