After recently being named ‘Club of the Year’ by the Middlesex County FA, community grassroots club Omonia Youth FC, sponsored by Spector, Constant & Williams, Vas Barbers and V Jewellers have gone one better as they were named the FA & McDonald’s national ‘Club of the Year’ at a star-studded award ceremony held at Wembley Stadium last Saturday.

Writing in the winner’s brochure, the FA’s Chief Executive Officer Mark Bullingham said: “The FA & McDonald’s Grassroots Football Awards are to recognise people who make a positive difference. It’s our way to celebrate some of the fantastic individuals who put their heart and soul into the grassroots game across England – and say a huge think you to the incredible number of volunteers who inspire us all.”

The club were represented at the event by Chairman Michael Pieri, Vice-Chair and Welfare Officer Myri Demetriou, Club Secretary Evagoras Mandrides and Coach Development Officer David Poncia who had the honour of having Sir Geoff Hurst on their table.

In the winner’s brochure there was a thorough explanation why each winner was worthy of their award with Omonia Youth’s reading: “Pinpointing the importance of their mental wellbeing and safeguarding, the club put together a ‘recovery curriculum’ to encourage compassionate and kind coaching ad ensuring the club supported its players.”

“As a club Omonia Youth works hard to enhance the football experience for children beyond matchday, and they make the most of their social media presence to deliver positive message at every opportunity.”

“Omonia Youth FC are a dynamic and family-driven club that continues to grow and consistently challenges itself to develop and improve.”

Prior to be awarded the trophy on stage, a video was shown detailing why Omonia Youth FC were worthy winners with contributions from coaches, players, parents and from the Middlesex FA.

At half time, all the awards winners were taken pitch side and were presented to the crowd with their trophy along with Sir Geoff Hurst – a lovely moment that was also shown on the stadium’s big screens too. This really is a wonderful honour for the club and Chairman Michael Pieri had this to say: “This really is an incredible tribute to what we try to do as a club, and that is to ensure that the children of our community have a safe, fun, positive and inclusive environment to develop their love of the beautiful game. We are of course delighted to be named club of the year; it is an honour and personally, I feel very humbled. The past 18 months have been so challenging for all, so to be recognised for what we did, to try to keep everyone in the club in a positive frame of mind, is amazing.”

“Growing up as a kid playing at Wembley, scoring a goal at Wembley and lifting the cup at Wembley were dreams. Well, as Omonia Youth FC we got to Wembley, we won an award at Wembley and at half time, I got to fulfil that dream of lifting a trophy at Wembley – dreams really do come true!”

“The award is national recognition of the hard work of so many people – the management committee whose support is unstinting, the trustees, the volunteer coaches, our parents, carers and of course our wonderful players. Thank you to them and thank you to our county FA, Middlesex, for their advice, guidance and support and of course thank you to the national FA judging panel who felt we were worthy of this award. Our ethos of ‘football for all’ is the bedrock of what we do, why we do it and how do it and this award is recognition of that ideal.” 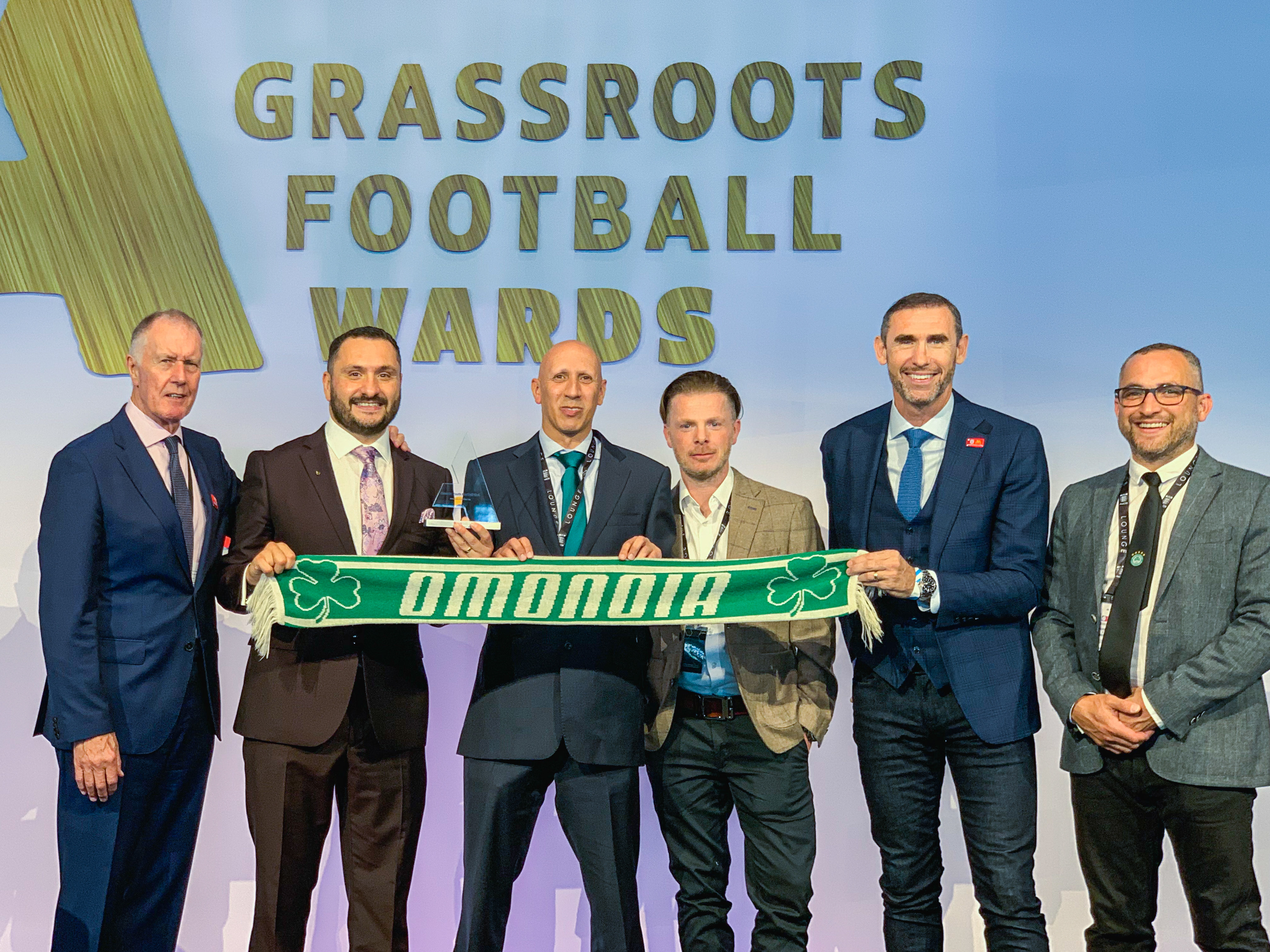 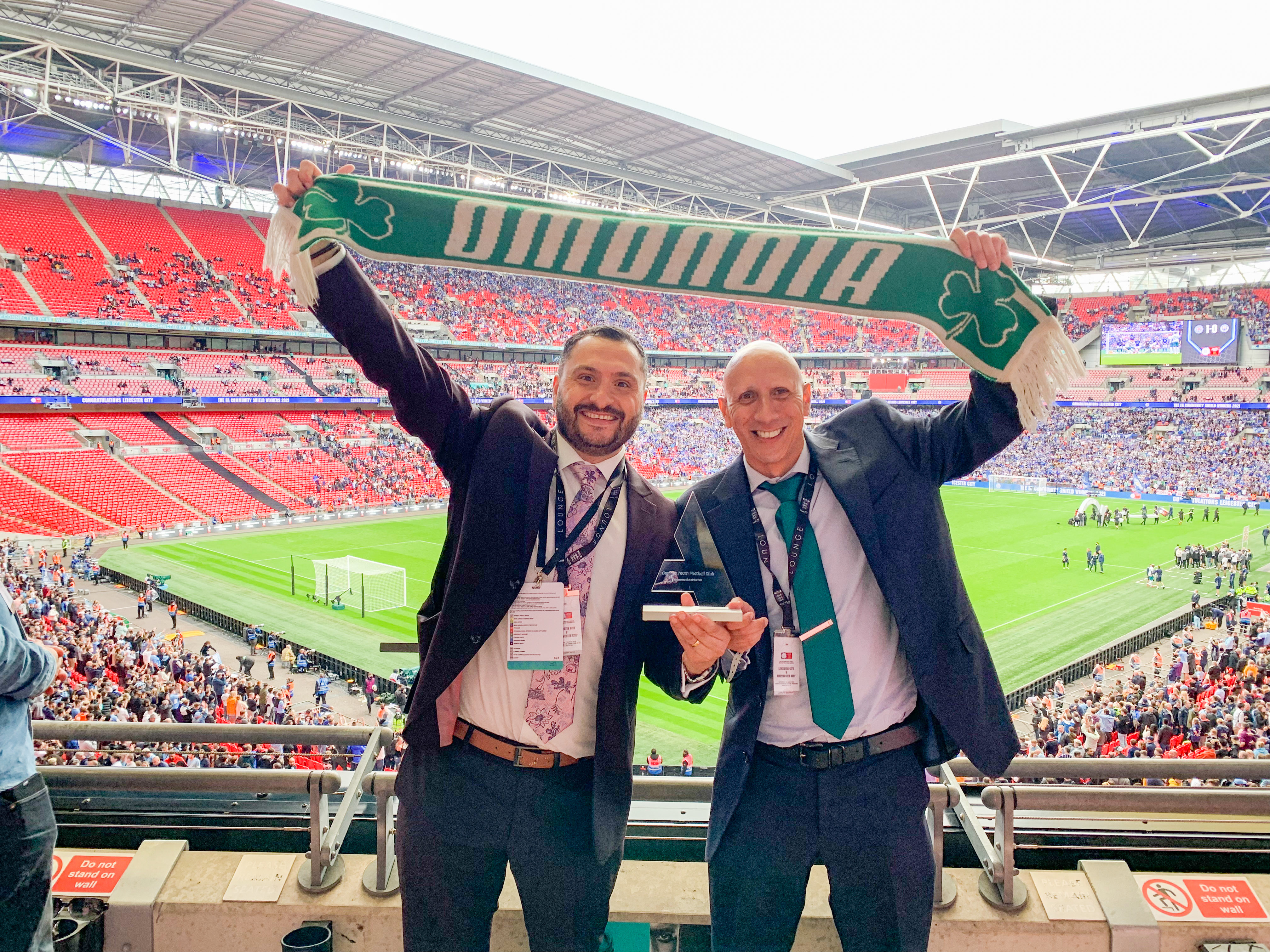 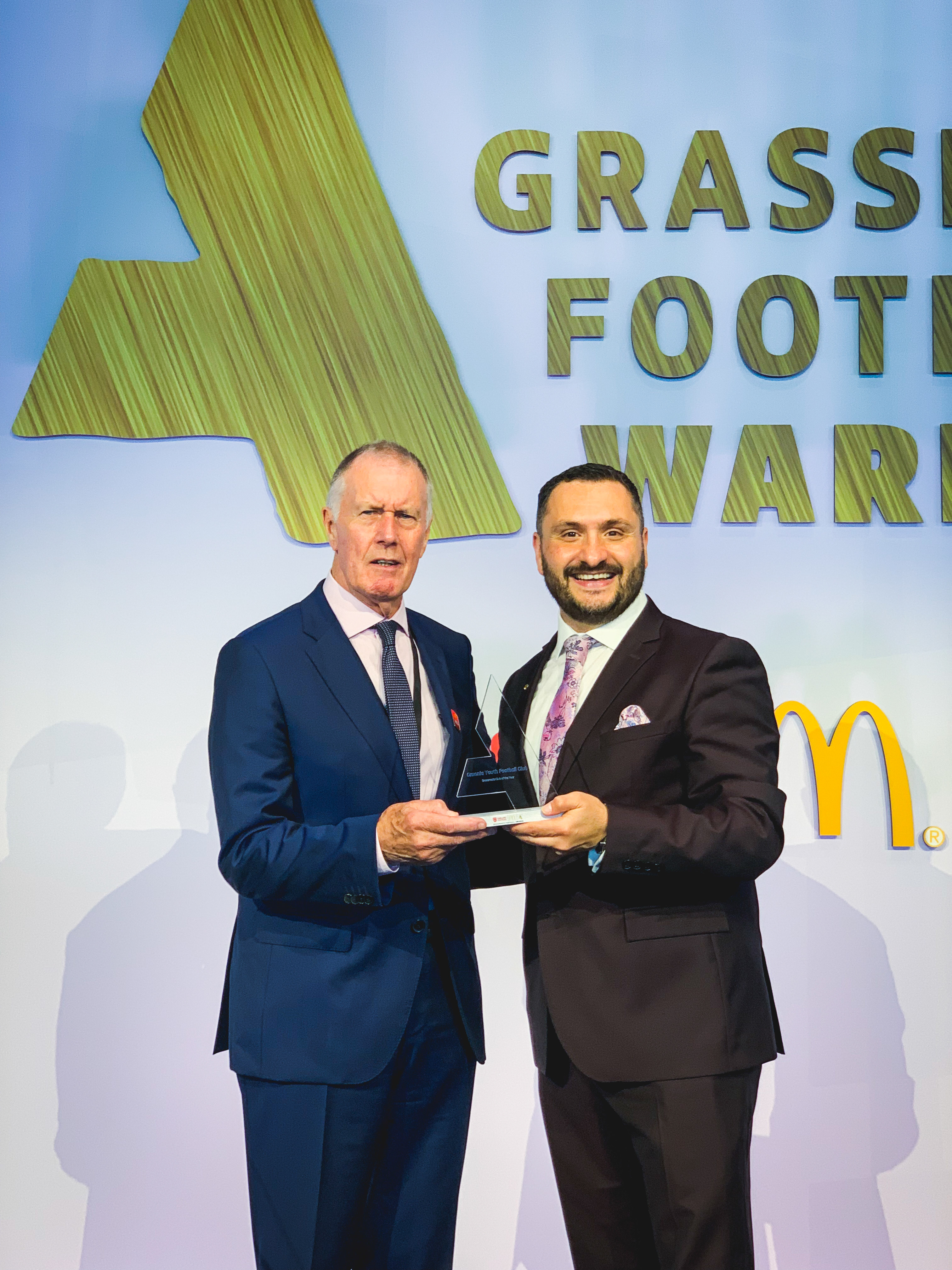 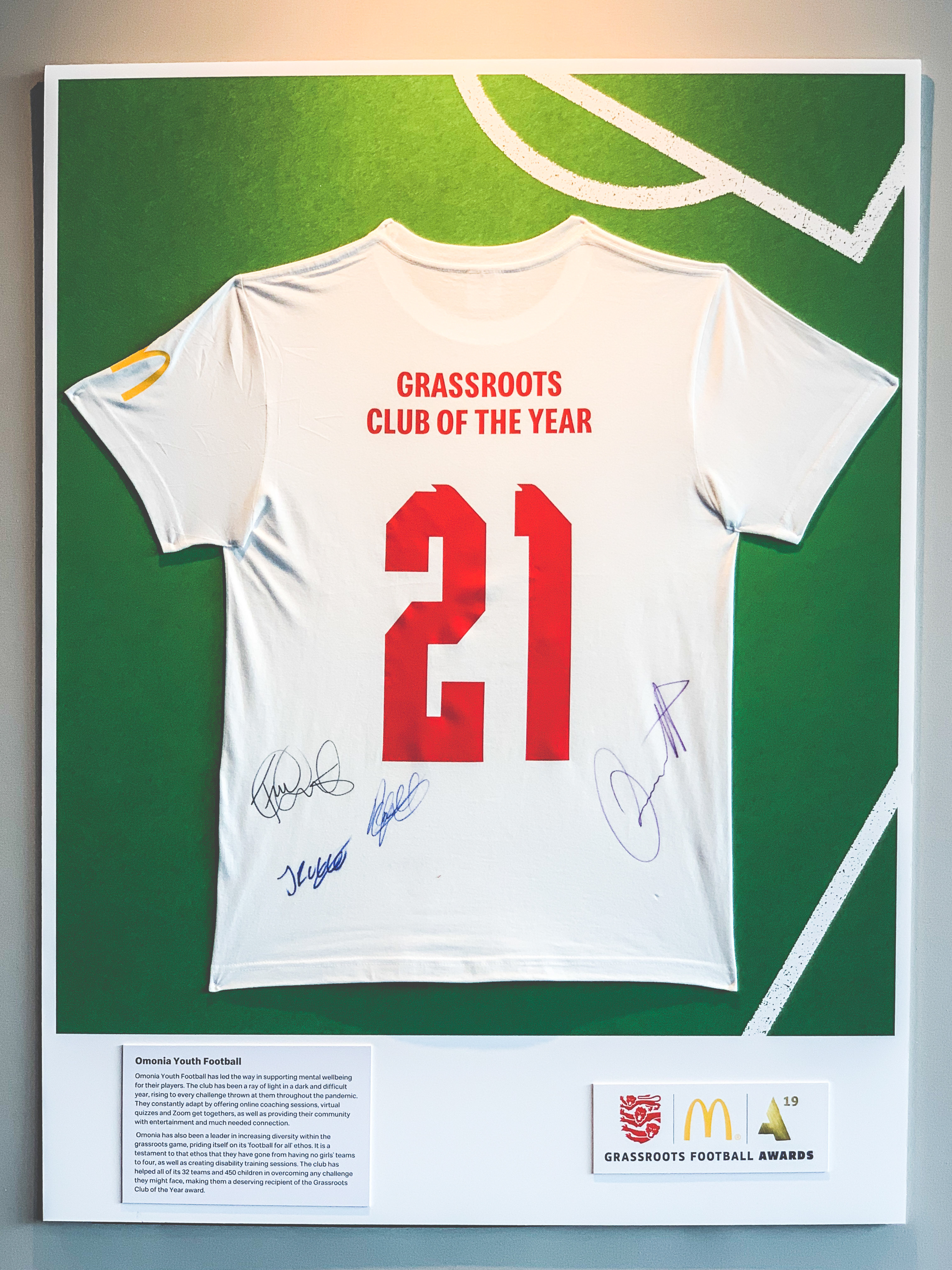 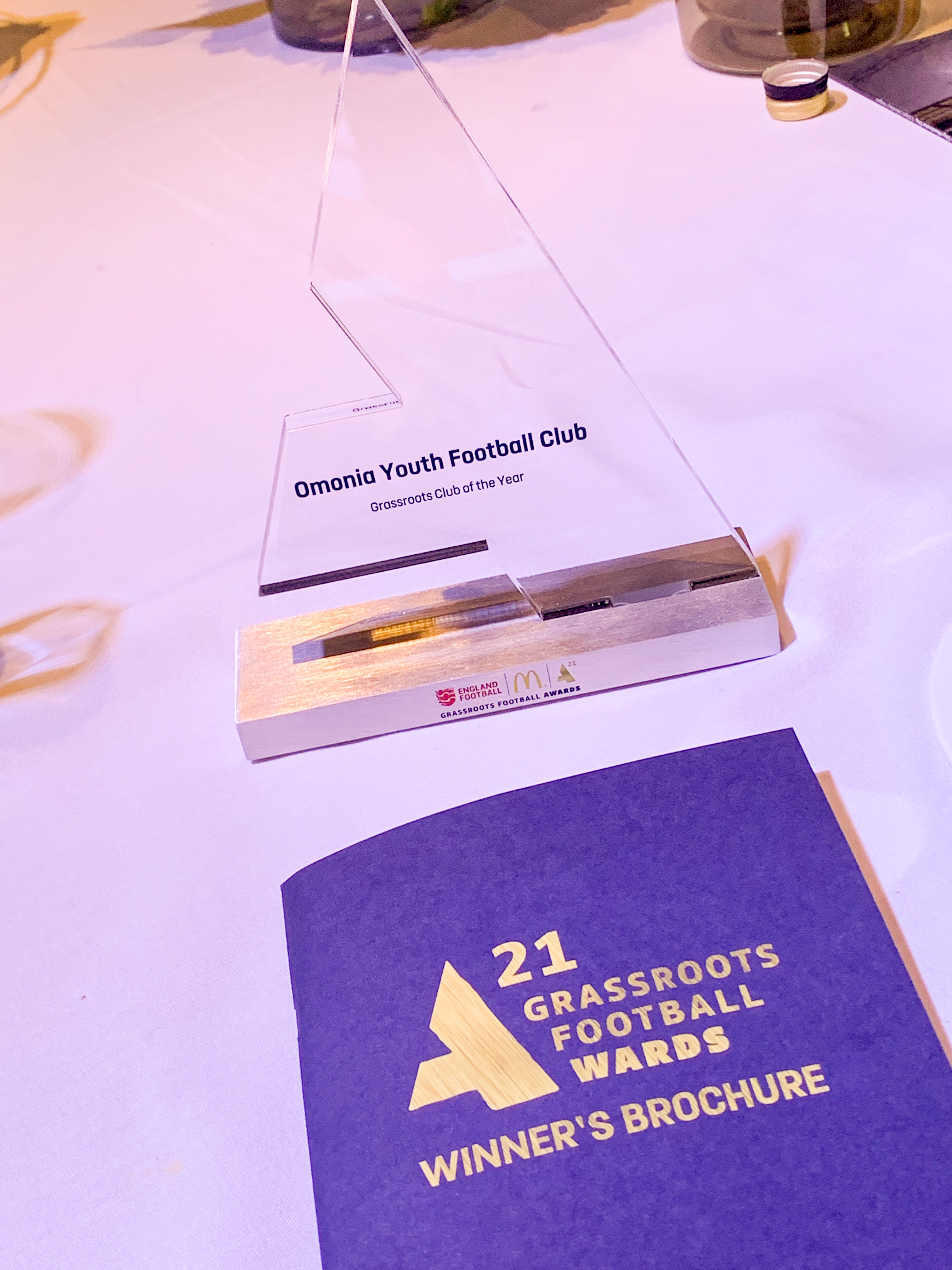 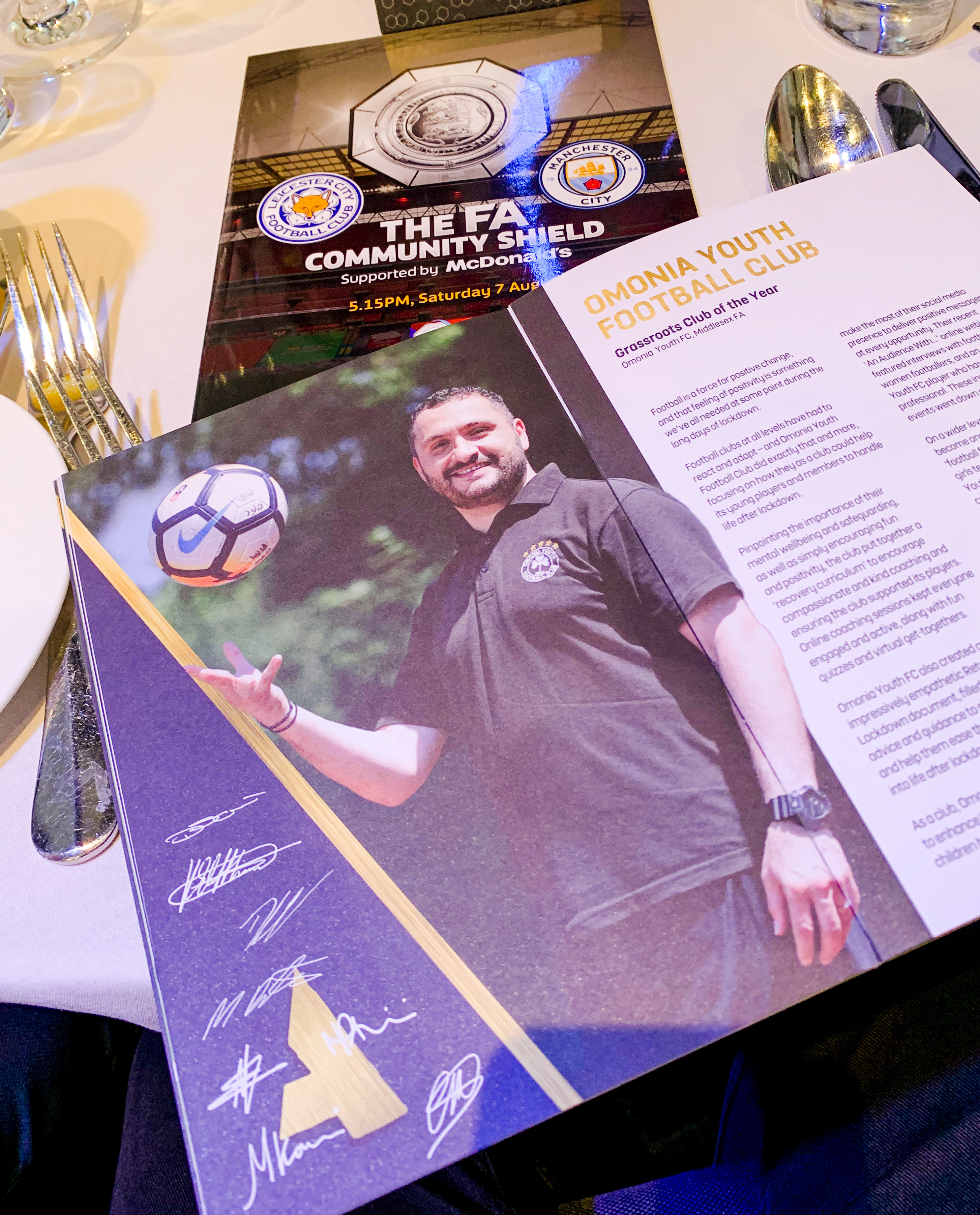 Article written by Michael Pieri
We use cookies to ensure that we give you the best experience on our website. If you continue to use this site we will assume that you are happy with it.OkPrivacy policy