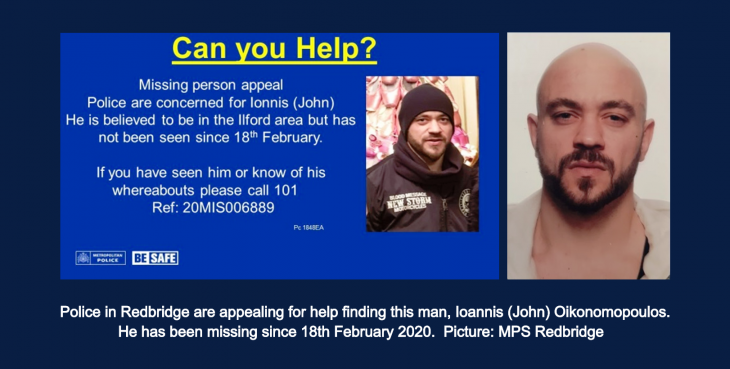 Police in Redbridge are appealing for help to find a man of Greek descent, who has been missing from the Ilford area and not seen since 18th February 2020.

Ioannis Oikonomopoulos is now 34 years old and originally from Patras in Western Greece. He was aged 33 at the time of his disappearance earlier this year.

Ioannis (John), a former beach lifeguard in Greece, has been living in London since last year and on Tuesday 18th February, his partner returned home from work and found the door to their apartment open with Ioannis missing.

They lived together at Eastern Avenue East, on the A12 at the junction with Silverdale Avenue.

Ioannis is about 5′ 9″ tall and at the time of his disappearance, he was wearing black sweatpants, a single white trainer on his right foot, a black jacket and a blue hat.

His girlfriend, along with his parents who live in Greece’s Achaia area are hoping that people living in London will be able to help locate Ioannou. It is believed that he may have some health problems.

Police have managed to trace some CCTV footage of Ioannis when he is seen on Tuesday 18th February 2020 just after 2 o’clock in the afternoon.

When he went missing, he only had his house keys and a bank card with him. The bank card has not been used and there is no other trace of him after this day.

In the CCTV clip Ioannis is seen without a shoe on his left foot.  It is unknown why this is the case.

PC Mark Denham from the Missing Person’s Unit in East London, told LGR, “It seems very out-of-character for Ioannis to go missing like this, and for such a long period of time.

“If anyone recalls seeing a man matching Ioannis’ description with only one trainer on, or perhaps you saw a single white trainer lying around somewhere, please contact us straight away.

PC Denham added, “On the day that he went missing, we can see on the CCTV that Ioannis is walking east towards King George’s Hospital but have not had any trace of him at all since then.”

Anyone who has any information at all, however small, is asked to call officers on 101 or you can call and text free anytime to the UK’s ‘Missing People’ charity in confidence via 116 000.